In section gallery the report about мотто picnic WINDS MC 24.06.2011? is placed a photo.

Czytaj więcej: In section gallery the report about мотто picnic WINDS MC 24.06.2011? is placed a photo.

Motocross WINDS MC Ukraine-Italy has come to the end. The photo can be seen the report on motocross in a heading gallery.

Motocross Ukraine-Italy has come to the end. For not one thousand kilometers was seen by many sights, have visited known historical places, have got acquainted with a slice of the European culture, have struck up new acquaintances among motor clubs of Europe.

Many thanks to all to those who helped during motocross, and also its organization!

The photo can be seen the report on motocross in a heading gallery.

Czytaj więcej: Motocross WINDS MC Ukraine-Italy has come to the end. The photo can be seen the report on...

"Biker Party in the Carpathian Mountains 2010" 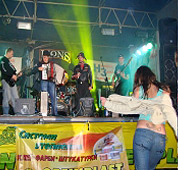 "Biker Party in the Carpathian Mountains 2010" 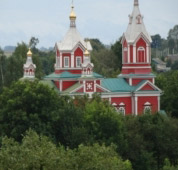 Koretz, now the regional center of the Rivne region, lies right on the highway Kyiv-Lviv. Hence, clearly visible gold-domed churches, which are better road signs lead to the city center.

Name of the settlement was first mentioned in chronicles in 1150 Ipatyevski Saw Koretz many princes: and Danilo Galitsky, and Theodore of Ostrog, who, in fact, ordered to establish a well-fortified castle on the site of the old fort. From the XV century. town was in possession of the princes Koretsky, Leszczynski, Czartoryski. Last of the masters, Jozef Czartoryski, at the end of the XVIII century. Koretz did one of the most beautiful and most powerful industrial cities of Volhynia. He founded a furniture factory, an art tradition which ran until the mid nineteenth century. And most importantly - built on the outskirts of Yuzefin porcelain factory, whose products were very popular far beyond the region. 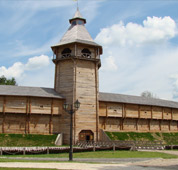 The fortified town was founded in Baturin 1575g. Polish King Stefan Batory as the northern outpost of the Zaporozhye Cossacks, to protect the north-eastern borders of the state.

The first dated mention of Baturin found in documents in 1625.
At 1654g. Baturin receives city status with Magdeburg law and the magistrate.

Trip to Poland for a concert "AC DC" 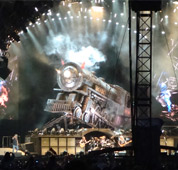 The clock exactly 21-00. Just really played the last song, because it lit up a huge cap with horns at the top of the scene. The crowd roared! On huge screens began cartoon movie - loco, branded AC / DC 's hot on the tracks, and Angus, devilish smile, tosses and throws coal into the furnace. AAAA! Oh, how it will be hot! Sparks fly from the train wheels! Powerful blast of pyrotechnics, a stage in the smoke, it leaves a huge locomotive, and under the initial chords of "Rock'n'Roll Train" from the last album, Black Ice jumping them!

Literally a couple of dozen meters worn on the scene 55-year-old Angus Young, in the tradition of school uniform in white socks and a dazzling guitar Gibson SG. A 62-year-old singer Brian Johnson, a vest and a cap in a hoarse voice shakes the airport.

Czytaj więcej: Trip to Poland for a concert "AC DC"